A recently released app is another example of how science and new technologies are being used together to create educational experiences for users.

If Idaho wildflowers are your thing, then you might be interested in the new app from High Country Apps. With a few swipes of your finger, detailed information– photos, descriptions, characteristics– on more than 800 Idaho wildflower species becomes available.

Once downloaded, the app works without an internet connection. 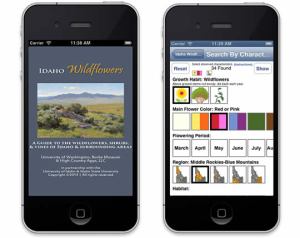 “‘Idaho Wildflowers’ provides access to information on the breadth of Idaho’s flowers all in one place for the first time,” Dave Tank, a U-Idaho associate professor of biology and director of the Stillinger Herbarium, said in a press release.

“For amateur and professional botanists, it’s always been a struggle. The ‘Idaho Wildflowers’ app provides access to information covering the whole state,” Tank said in the release.

The information in the app was compiled by the Consortium of Pacific Northwest Herbaria, which brings together 32 herbaria from around the region. The app uses multi-media platforms, including photos, range maps, and text (such as plant descriptions).

High Country Apps specializes in “creating mobile apps for outdoor enthusiasts,” according to its web site. The company had previously marketed apps for ‘Oregon Wildflowers” and “Washington Wildflowers.” “Montana Grasses” is a recent creation, as well.

The ‘Oregon Wildflowers’ app, which came out earlier this year, has information on almost 1,000 wildflowers and plants found in Oregon and nearby parts of Washington, California, and Idaho.